Just a collection of my favourites

"Touching people's lives in a positive way is as close as I can get to an idea of religion. Belief in one's self is only a mirror of belief in other people and every person."

"When I was young there were beatniks. Hippies. Punks. Gangsters. Now you're a hacktivist. Which I would probably be if I was 20. Shuttin' down MasterCard. But there's no look to that lifestyle! Besides just wearing a bad outfit with bad posture. Has WikiLeaks caused a look? No! I'm mad about that. If your kid comes out of the bedroom and says he just shut down the government, it seems to me he should at least have and outfit for that. Get a look!"

"Whatever you now find weird, ugly, uncomfortable and nasty about a new medium will surely become its signature. CD distortion, the jitteriness of digital video, the crap sound of 8-bit- all of these will be cherished and emulated as soon as they can be avoided. It's the sound of failure: so much modern art is the sound of things going out of control, of a medium pushing to its limits and breaking apart. The distorted guitar sound is the sound of something too loud for the medium supposed to carry it. The blues singer with the cracked voice is the sound of an emotional cry too powerful for the throat that releases it. The excitement of grainy film, of bleached-out black and white, is the excitement of witnessing events to momentous for the medium assigned to record them."

So look forward to lots of that 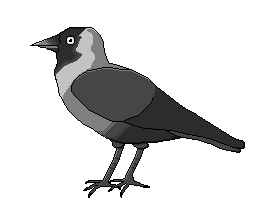